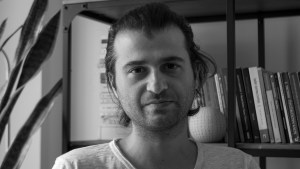 He graduated from Radio, Cinema and Television department of Kocaeli University. During his undergraduate education, he worked on commercial films, music videos and television series as assistant director and post-production manager. He graduated from Film&Television master program at Istanbul Bilgi University. He has been working in the management team of Sinopale, International Sinop Biennial since 2006. He initiated Sinopale Film Festival in 2016. He produces independent films since 2015. In 2018, he has won the special pre-jury award in Marmaris Short Film Festival and nominated as the best short documentary in 51. Siyad Awards with his film Barsyphere. His article “Wingless Lilith of Cinema: Sibel” has won the first prize in Sekans Film Review and Film Analysis Competition in 2017. His latest film Anima had its premiere at National Documentary Competition of 40. Istanbul Film Festival and won the Best National Documentary Prize.

He has been selected to participate in Talents Sarajevo 2021 as one of the talents from Turkey. Sarajevo Talents was launched in 2006 in cooperation with the Berlin International Film Festival and Berlinale Talents initiative, Talents Sarajevo transformed into the main regional hub for aspiring film professionals.

He has been running a youtube documentary series which he travels to film festivals and share experiences. He established his production company Paspas Film in 2019. He lives in London and İstanbul.